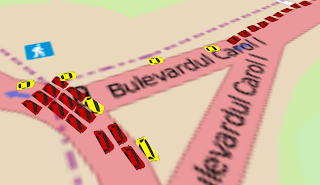 Hello
My name is Alex Siro and i`m currently working on my first project using Cesium
I’ve managed to overcome the initial problems, but now I’ve come across some other ones, which can be seen in the posted screenshot

Below is my animation javascript code for an iteration:

I can answer Questions 1-4.

Long-story short, I suggest writing custom rendering code based on the existing Polygon implementation or even the simple custom rendering example in Sandcastle. You’ll get the best performance and flexible for your use case.

Currently, there is not a way to adjust the texture coordinates computed by the Polygon or provide a texture matrix. We want to extend the material system to something similar to surface shaders, which will allow better control over inputs like texture coordinates to the material system, but it will be a while before we get there as this needs to be carefully designed. Adding a texture matrix to the Image material may be reasonable in the meantime.

We fixed jitter in the globe itself, billboards, labels, and polylines, but have not done polygons yet. It will be easy; we will use GPU RTE like the polyline. We welcome this contribution if you are up for it; those of us that typically work on this code have our hands full with NORAD Tracks Santa at the moment. I created Issue 358.

The billboard collection that is used to render points has lots of optimizations that batch up all the billboards and only modify parts of the vertex data that need to be. Currently, polygons are rendered individually so they will render much slower than billboards. We plan to do batching for polygons (and other objects like ellipsoids, for example), but this will require pretty significant design work and is at least a few months out. We welcome a contribution here too, but you might also want to write custom code optimized for your case - it is certainty less work than the general feature.

Yes, you could do this in a vertex shader if you write custom rendering code, but be careful with the 32-bit floating point precision. You will have to emulate double precision. However, chances are if you implementing batching, you will not need this optimization, or at least this optimization will have less impact. Batching may be 10x, and this might get you 2x (I just made those numbers up but you get the idea). You could also do this server-side, and just send a typed array over the wire ready to be rendered.

Thanks for your guidance, Patrick! I’ll try to implement custom solutions as you suggested.
Does anyone know the answer to the last question?

Also checkout the Renderer section in the Architecture Guide if you haven’t already. It is slightly out-of-date now that we started on the Data-Driven Renderer. The big difference is we do not have to explicitly make draw calls; instead, we return draw commands, which allows the renderer to cull, sort by frustum, etc. The code examples I pointed you to will make this clear.

Unfortunately the solutions you suggested might take some time, so I decided to use a combination of polylines instead.

It seems that the width properties of the polyline don’t work. Are they supposed to work? I looked at the objects created according to the czml data and the width values are in their place. Aren’t the properties passed for rendering?

Polyline width doesn’t work in Windows when ANGLE is on (which is the default in Chrome and Firefox) because ANGLE doesn’t support polyline width greater than one. This is not an issue on Linux and Mac though. We plan to implement polyline width in a vertex shader to bypass the problem, but that is a little ways out.

Although I still think custom rendering code is the best approach for you, we just made two changes you will be interested in (pull these from github; they will be in b13 in February):