CesiumJS is an extensive library with a lot of functionality that, depending on the app or use case, may go unused. Given that it is a 3D geospatial engine, some users may use the whole stack by embedding the CesiumViewer in their application utilizing all the features that the Timeline and Animation widgets bring, some users may only want a lean interface through the CesiumWidget and some users may only want to use the geospatial math library in Core, for instance. Given the diversity of our user community and the domains CesiumJS is used for, the benefits of having a modularized structure of packages become increasingly apparent: users can choose to depend on only what they want to use in their application. The benefits go beyond producing a leaner bundle; it eliminates the need to install all of the direct dependencies that are synced with the existing cesium npm package,. It also reduces the surface area of the API which the user is supposed to learn along with providing flexibility in selecting when/how they want to update their dependencies. 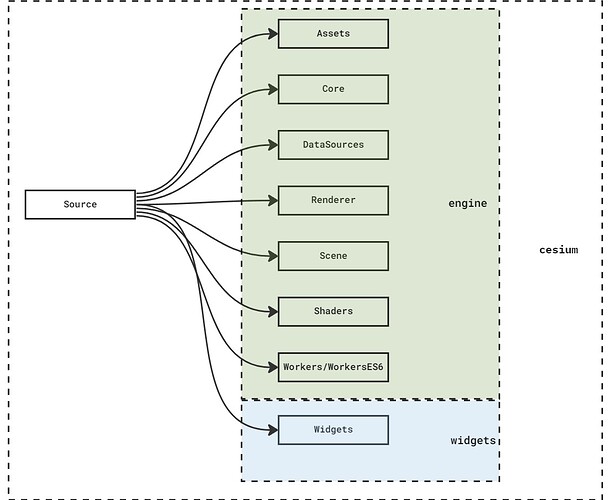 We plan on maintaining our regular monthly release schedule for CesiumJS. Users may continue to use the combined CesiumJS release, however, anyone that would benefit from ingesting smaller, more specific packages would be able to use them when they’re released alongside the combined cesium package. To start, these smaller packages take the form of “engine” and “widgets”. We use npm workspaces to impose a monorepo structure. These packages can be found in the root level packages directory and will be published under the @cesium scope, i.e. @cesium/engine and @cesium/widgets. As compared to the combined CesiumJS package, which includes pre-bundled artifacts such as Cesium.js, index.js and index.cjs, these newer packages will be shipped in a lean configuration, as ES modules with TypeScript definitions, as is the standard for modern packages. This will allow users to employ the bundling tools of their choice for their applications and take advantage of features like tree-shaking, or dead code elimination. Also, as per npm best practice, these packages will follow semantic versioning, which let users clearly understand the scope of changes between versions and prevent cases where allowing npm to automatically update versions would result in broken builds.

The engine package is the core runtime components of CesiumJS, including everything except the Widgets folder found in the combined CesiumJS release. The one exception here is that CesiumWidget has been moved from the widgets to engine. This provides a lean and minimal way of adding CesiumJS to the browser. So, if you’re only using the engine package, you can get started with the following snippet:

Since widgets depends on engine, the engine package will automatically be installed when you install widgets.

In terms of what these changes look like in the repository or the combined release, all source files from the root level Source folder have been moved into the respective package folder. For example, Scene.js has moved from Source/Scene/Scene.js to packages/engine/Source/Scene/Scene.js. And Viewer.js has moved from Source/Widgets/Viewer/Viewer.js to packages/widgets/Source/Viewer/Viewer.js. Any direct dependencies included in the source code have been moved to the ThirdParty folder within each package’s Source folder.

When working within the repository, each package also comes with it’s own simple scripts:

To minimize impact on applications that depend on the combined CesiumJS release structure, static assets found in Assets, ThirdParty and Widgets are still copied to the root level Source folder at the time of publishing.

These changes are another important step of our plan to continue modernizing the CesiumJS library and it builds on the previous improvements to our source code, tooling and build processes. In the future, we hope to be able to break the packages down along even finer lines, such as publishing a core package that contains all the geospatial math classes like Cartesian3 etc.

Pre-release version of @cesium/engine and @cesium/widgets are now available for testing. Please try them out in your applications and provide feedback either here or directly on the pull request.