I am currently running CesiumJS 1.99 and am attempting to load in a large KMZ (20 MB) into Cesium. The KMZ consists of polylines, billboards, labels, and polygons. Loading in 75% of the KMZ I end up with 195,292 entities.

I then tried to split it into 20 chunks and load them one at a time. This works if I wait very long between loading each KMZ (about 2 minutes). I suffer no FPS degradation and it is quite smooth. If I try to load them one after another I run into the memory error at about the same spot.

I am running this self hosted. I did check CesiumION to see if it would help, however it said that my KMZ is not supported for tiling:

We were unable to process your data due to the following issue:

Error: Input does not contain any eligible features for tiling.

Read about what data formats are supported on Cesium ion.

The error seems to happen when the main thread hits around ~3800 MB.If I move slowly it seems like the GC can catch up and remove some unused things.

I have tried a number of ways to optimize the import but as of now I am doing:

First I set up my Cesium viewer. I have tried to optimize my settings here to save memory, such as requestRenderMode, tried requesting WebGL 2.0, etc. The options below are just where I ended up after a lot of trial and error:

Destroying the datasource at the end after adding it to the entities seems to let the program get a little further.

But this had worse performance.

I also attempted to add the objects through the primitive API instead of the entity API. I had a few issues
with this:

The FPS took a major hit. Even when loading 1/20 of the objects with the entity API the rendering did not seem to be nearly as smooth.

I was able to load in the entire object piece by piece but it required quite a bit of manipulation, such as:

I had trouble taking some of the datasource entity properties and applying them to the primitive version. The big one was coloring on the polylines/polyline graphics (I am unsure specifically what the difference is between the two?) and labels not coming in with billboards.

I have attempted to use both Firefox and Chrome’s memory profilers but they just end up crashing.

Here is a sample of one of the polyline/line string entities in the KMZ. You can see the lines are quite complex:

I’m unsure if there are other optimizations available, maybe something I am over looking, or further recommendations.

Here are the JSVM memory usages in the Chrome devtools after loading 15/20 of the split up KMZs: 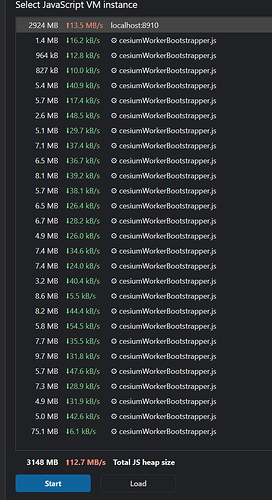 There is also a large 3D Tileset primitive in this but I have not had any issues with it. I am (attempting to) drawing the KMZ entities on top of the 3D Tileset.