I’ve added Neowise 2020 comet (as a big orange ball.) I’ve converted its polar RA/declination/distance to Cartesian xyz, then every frame transform that ICRF to Earth Fixed. Its distance is correct, but since it is around 100 giga meters away (Sun is 150 giga meters away) I just made it as large as the Sun so you can see it easily. (A 5000 meter radius would be very very tiny on the screen, it’s visible in real life due to the tails not it’s size/distance combo.)

I was going to try to add the 3D buildings as in https://sandcastle.cesium.com/?src=Sample%20Height%20from%203D%20Tiles.html&label=All
but didn’t get around to it. The video seems darker in YouTube than when I recorded it. I should probably reduce the alpha on the console dropdown in the future. 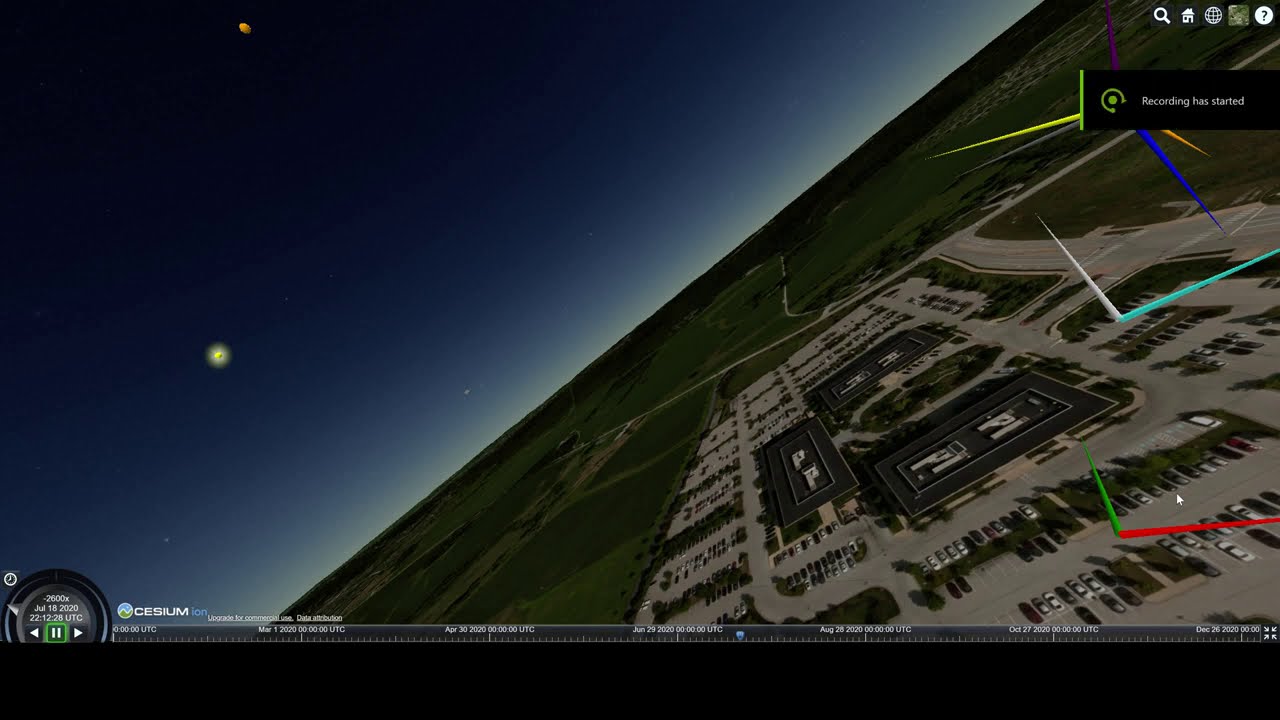 I’ve added some celestial compasses to my plugin:

2 for Earth centered non-spinning https://en.wikipedia.org/wiki/International_Celestial_Reference_System
https://en.wikipedia.org/wiki/International_Celestial_Reference_Frame
ICRF +z arrow (Earth’s spin axis, pointing up, same as EF+z)
ICRF +x arrow (rotates around same plane as EF x arrow in the opposite direction to negate the spin) (not shown in video)

The Earth’s spin axis points in the same direction relative to distant stars throughout the year (it does move, however very slightly over 10s of 1000s of years due to precession, and extremely slightly due to nutations) +z away from the Sun at Winter solstice, +z toward the Sun at Summer solstice.

Interesting side fact: it takes 7 minutes for the earth to orbit a distance of it’s own diameter(same amount of time for Sun light to reach the Earth.) That seems crazy slow when its orbit radius is around 150 giga meters! I had always imagined the Earth orbiting at least 1 diameter per second, if not more! There are 525960 minutes/year, so around 75137 diameter-long-circumference to traverse. Well, it’s got all year at 24/7 to do it. If you think that’s slow, Jupiter’s orbit speed is less than half that of Earth’s! (BTW by orbit speed I mean distance along the circumference, not angular orbit speed.)

First video since adding planets. Interesting how a pair of planets move across the night sky due to Earth’s spin. 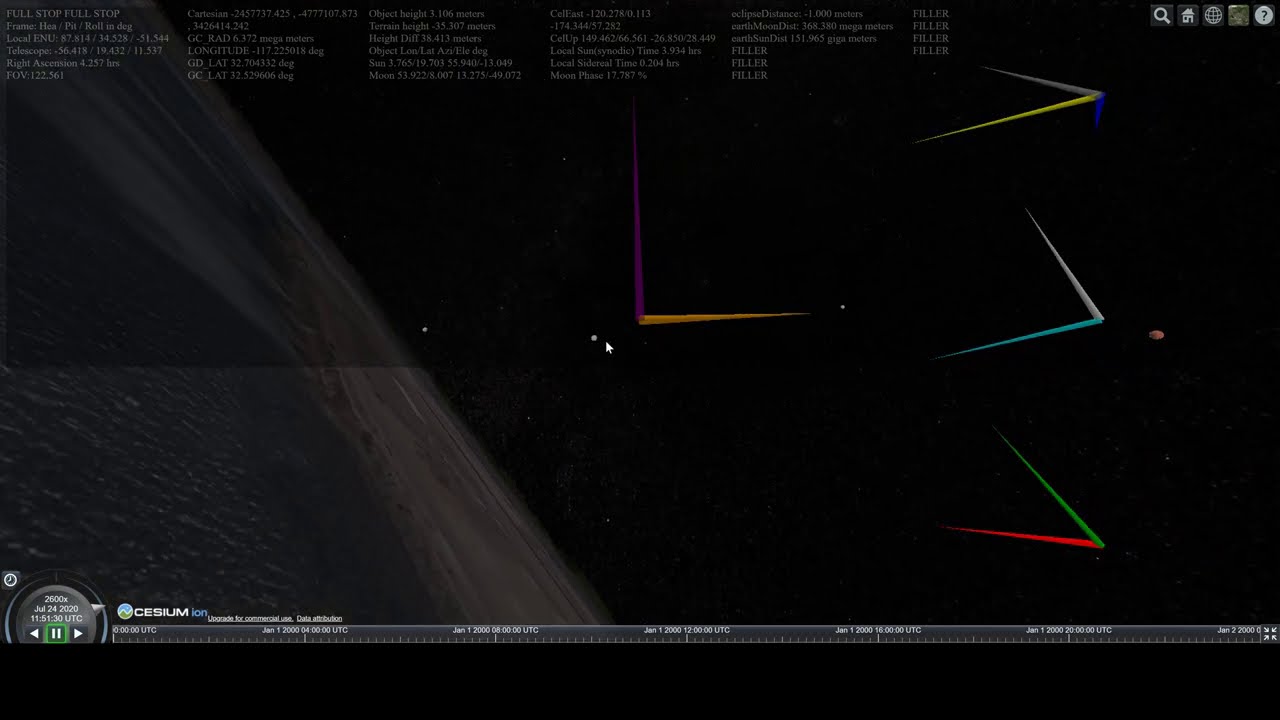 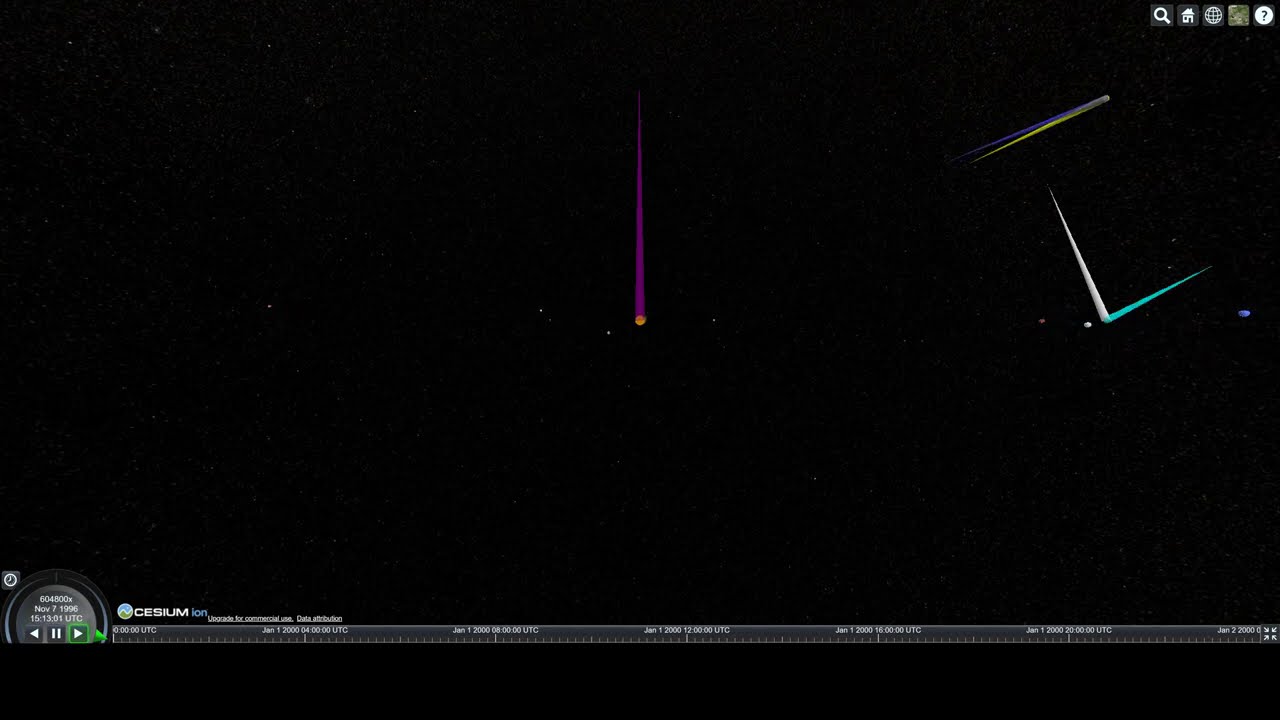 I’ll make a Solar system top view when I figure out a good way to do it. I want to include all planets, but including the far away ice giants makes the 4 inner orbits very small on the screen and I want to retain actual orbit sizes. Perhaps an oblique view…

Just posted 2 videos showing planet alignment in 2020 (one quite rare, occurring only every 20 years.) “On average, these two planets come as close as this about every 300 years, though the last time dates back to July 16th, 1623!” https://www.space.com/amp/39240-when-to-see-planets-in-the-sky.html 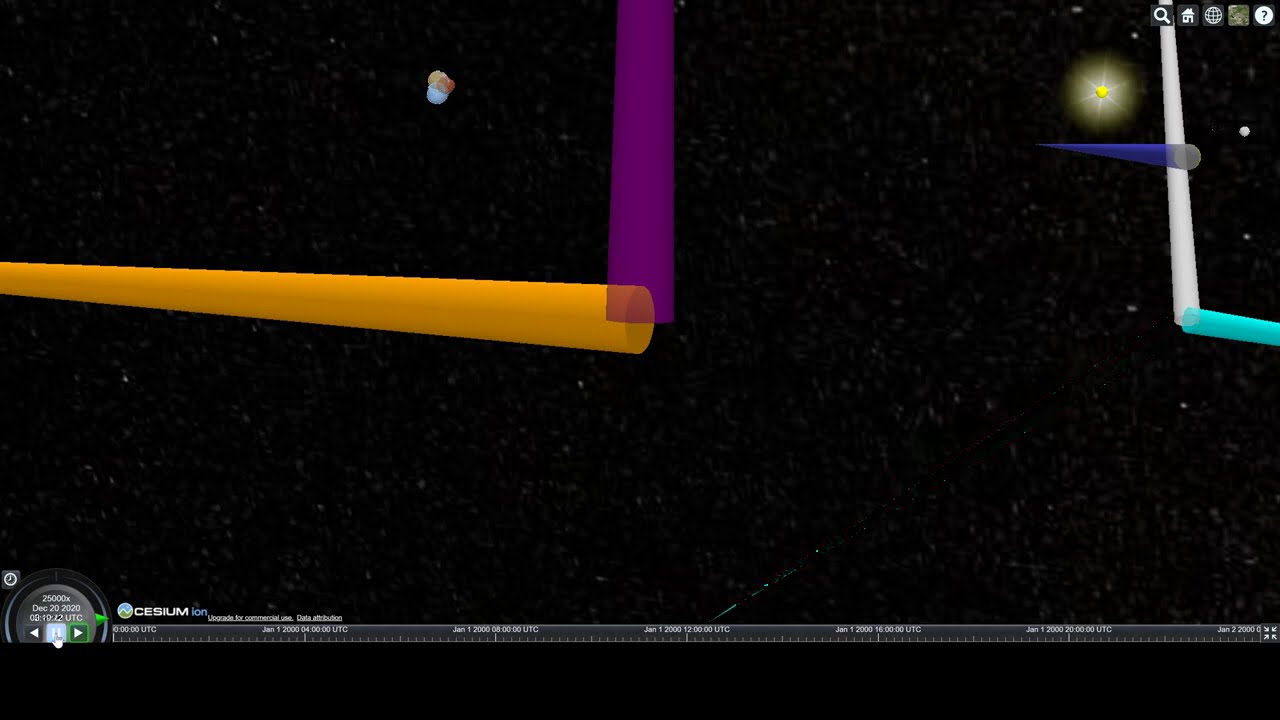 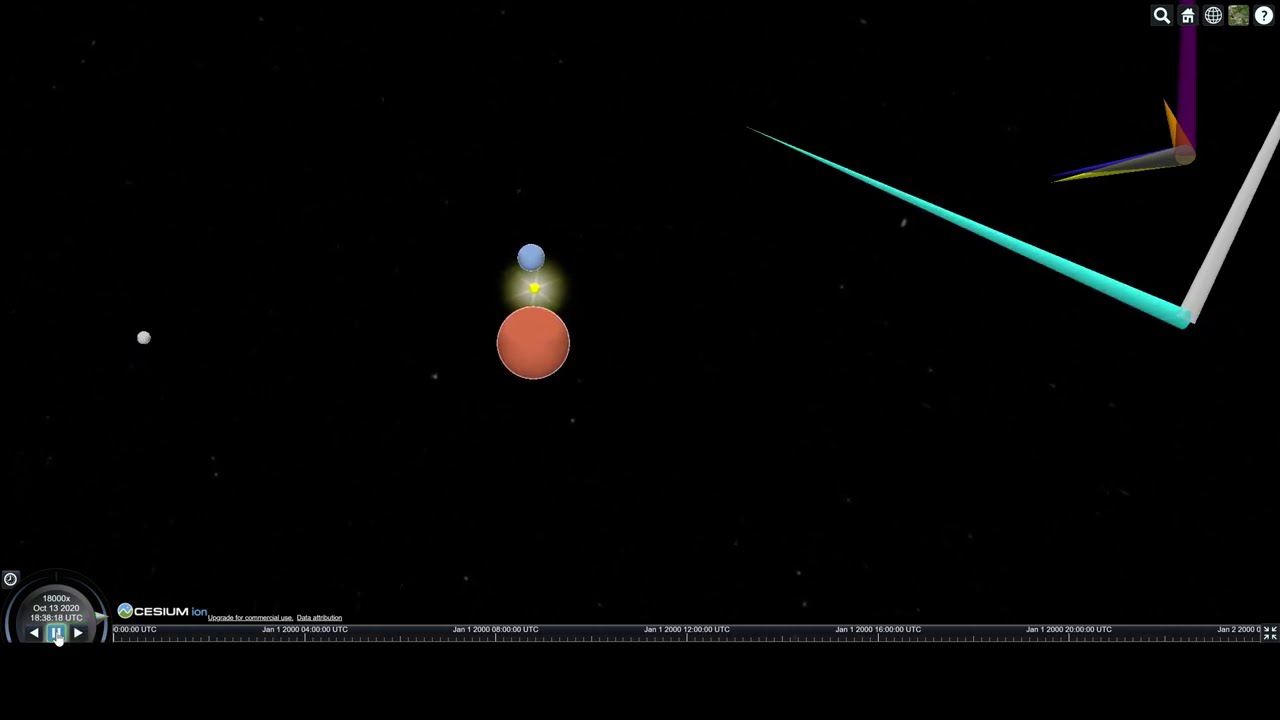 Zooming in the Skybox got me thinking about how cool having an HDR point-cloud star-field would be. Deep blacks with sharp bright stars. Brightness of each star mimicking the real apparent brightness of the actual stars. It should be possible 1.52 and beyond https://cesium.com/blog/2018/12/03/cesium-version-1.52-released/ There could be a setting to only show stars with a minimum amount of brightness, to duplicate what can be seen in a city compared to what could be seen out in the countryside.

Where is this plugin located? I am trying to write a similar app but with no luck as of now:
http://win98.altervista.org/space/exploration/3d/3dtracker.html

Arrows should point to an object but they don’t.
But also this additional code should draw lines pointing to sun, but it does not work: