NASA has developed a few cool examples integrating their Global Imagery Browse Services (GIBS) and Cesium. I particularly like this one where you can use the timeline to see daily imagery:

Check out all their examples on GitHub:

Awesome! Not only the current cloud cover map, but easily accessed historical cloud cover! I noticed that it also has the odd blank areas that http://openweathermap.org/help/sat.html has. Are those gaps out of the FOV of the satellite cameras that take these pictures by chance?

I suppose a JavaScript/WebGL engine has broader coverage(number of devices) than a Java based engine (such as Nasa’s World Wind engine http://worldwind.arc.nasa.gov/java/ )

Such as Chrome blocking Java. https://support.google.com/chrome/answer/1247383?hl=en

You are correct about the gaps being caused by the size of the MODIS instrument’s field of view. This snapshot from Systems Tool Kit (STK) byAGI shows the extent after about 8 hours which means worldwide updates 3 times per day. 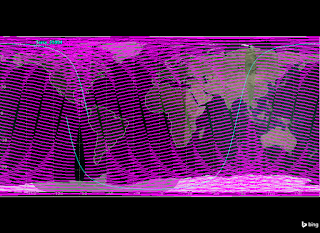 Hyper - some of the NASA GIBS folks are here at FOSS4G NA. I can introduce you tomorrow if you want.

You can scroll back in time such as to 2-28-2015 and see the huge dust storm blow off the Sahara into the Atlantic
http://modis.gsfc.nasa.gov/gallery/individual.php?db_date=2015-03-14

This would be useful for tracking volcanic eruptions and hurricanes as well. Setting speed at 21000x or so it a good way see day to day changes quickly.

Are there multiple satellites taking these photos? If just one I’d imagine there would be quite a time difference when the first and last photo are taken. Actually if just one it would have to continuously alter it’s orbit otherwise it would just cover the same ground over and over again, so it’s probably multiple. It would be nice if there were no gaps with either more paths or a wider FOV.

I think it is just one satellite. The imagery becomes available within three hours of the observation.

Actually if there were 2 adjacent paths taken at the same time then half of the time photos wouldn’t be taken, also they’d orbit at the same speed (as 1 pair) and wouldn’t need partners, so scratch out the idea of 2 pairs. The longitude of the bottom of a path roughly matches up with the longitude of the top of the next path so when one is done it’s partner immediately begins with the next adjacent path.

The image depicts the Terra satellite’s MODIS sensor footprints. I’ve attached two movies showing about one half orbit of Terra and Aqua (Terra’s sister spacecraft). In 3D, the “yellow” lines are the orbit paths and the “blue” lines are the ground traces.

Perhaps Aqua could have a orbital inclination that also created north-east (=south-west reversed) photo paths by moving easterly faster than the Earth spins easterly, but it seems that would result in a more horizontal path.

Terra (EOS AM-1) is a multi-national NASA scientific research satellite in a Sun-synchronous orbit around the Earth. It is the flagship of the Earth Observing System (EOS). The name "Terra" comes from the Latin word for Earth. A naming contest was held by NASA among U.S. high school students. The winning essay was submitted by Sasha Jones of Brentwood, Missouri. The identifier "AM-1" refers to its orbit, passing over the equator in the morning. The satellite was launched from Vandenberg Air Forc...

Both are listed as a sun synchronous orbit quote from the wiki page

A Sun-synchronous orbit (sometimes called a heliosynchronous orbit[1]) is a geocentric orbit which combines altitude andinclination in such a way that an object on that orbit will appear to orbit in the same position, from the perspective of the Sun, during its orbit around the Earth. Or in other words orbit in such a way that it precesses once a year. The surface illumination angle will be nearly the same every time. This consistent lighting is a useful characteristic for satellites that image the Earth’s surface in visible or infrared wavelengths (e.g. weather and spy satellites) and for other remote sensing satellites (e.g. those carrying ocean and atmospheric remote sensing instruments that require sunlight).

It would be interesting if NASA were to show the satellites move as the timeline progresses along with the weather imagery.

some other links I ran across The Moderate Resolution Imaging Spectroradiometer (MODIS) is a payload imaging sensor built by Santa Barbara Remote Sensing that was launched into Earth orbit by NASA in 1999 on board the Terra (EOS AM) satellite, and in 2002 on board the Aqua (EOS PM) satellite. The instruments capture data in 36 spectral bands ranging in wavelength from 0.4 μm to 14.4 μm and at varying spatial resolutions (2 bands at 250 m, 5 bands at 500 m and 29 bands at 1 km). Together the instruments image the entire Ear

“A ±55-degree scanning pattern at the EOS orbit of 705 km achieves a 2,330-km swath and provides global coverage every one to two days”

These instruments seem to be running well beyond their 6 year design range at around 15 years now. Both satellites have about a 98 minute orbital period, so 1440/98 = 14.7 orbits per day.

Can track them real time with Cesium here (unfortunately this doesn’t indicate which is the bright side of the Earth, the side the sun is shining directly upon)

Orbit circles are shown in the celestial frame on the Nasa site using Cesium. It would be nice if they could also draw orbit lines in Earth fixed frame where they’d be warped due to the Earth spinning.

Accelerating time with AGI’s site you can see that:

-Terra (25994) clearly moves SW in the bright side of the Earth frame.

Though it would be nice if AGI’s site would also allow the camera to be stationary in the Celestial frame and not just within the Earth fixed frame (or is that already an option? perhaps via the console at least)