While rendering some fairly basic primitives, I’m getting a strange artifact that looks like there’s something slicing through the geometries.

With terrain on, a similar thing happens, but it’s more obvious as the terrain appears to cut through the 2D geometry too. 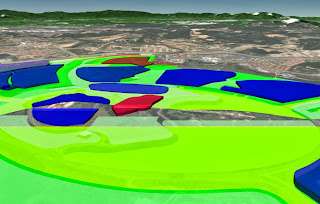 It appears as a line whose width and angle are dependent on the position of the camera. The width of the line seems to increase as the gets higher (or as I middle-click pan up and tilt down), it’s always perpendicular to the direction of the camera across the plane of the ellipsoid, and as I zoom in it gets further away.

Do you know what this might be? Have we set something up incorrectly?

Then wrap that in a primitive:

I’ve done some work cleaning up our primitive creation, but the problem remains. We now create geometry with:

The artifact doesn’t appear to affect the 2D geometries with the EllipsoidSurfaceAppearance.

Your code is OK. This is a known-issue with translucent objects due to how we eliminate z-fighting for massive view distances. Opaque objects do not have this artifact. If you are curious about the details, see these slides (Slides 29 and 30 in particular):

We can minimize the artifact a bit more by reducing frustum overlap, but fully eliminating it in the general case is hard. Recently, I almost solved it with stenciling, but it didn’t turn out as expected. I hope to think about it again, but it will be a few months out.

As for the screenshot with terrain, Kevin may have more to add.