I’ve been looking for a library that adds heatmaps to Cesium and found that there aren’t any. So I decided to create one myself: CesiumHeatmap on GitHub.

I decided to use heatmap.js as it’s easy to use and fairly lightweight. A heatmap is created by calling CesiumHeatmap.create() and adding data to the returned instance.

Take a look and improve it if you want because it’s far from perfect. Currently the main issue I have with it is that the resulting heatmaps on the globe don’t fit well when the area (bounding box) is very big (for example the entire EU).

Does it look fine when you are viewing the heatmap in 2D mode? I’m wondering if it’s a projection issue.

No, it looks the same.

Take a look at the GitHub Repository, it’s not that much code and it’s not very complicated. This is what it looks like: 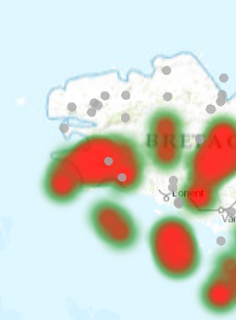 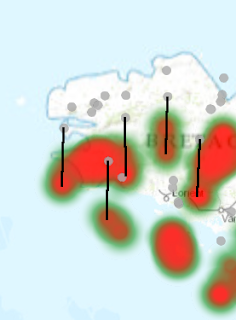 The heatmap should be positioned on top of the circles, but for some reason it’s positioned way south of them (the lines connect the positions that should be lined up). The further north or south you go the closer the heatmap is to the expected position (the circles). This leads me to believe something is wrong with the way Cesium streches it out over the rectangle and/or the way I draw it.

Changing the Tiling Scheme to WebMercatorTilingScheme seems like it would be the correct way to do this, but looking at the documentation for this class there doesn’t seem to be a way for this to be passed on to the SingleTimeImageryProvider. It just states "The single image is assumed to use a GeographicTilingScheme". Do you know of a way I should do this?

You’re right, SingleTimeImageryProvider doesn’t seem to support that. I don’t see any good reason for that, though. It should be easy to create a fork of it that does the right thing, or perhaps even monkey patch it by overwriting the _tilingScheme property after it’s constructed.

This works perfectly, thank you so much!

Now to find out a way to use the heatmap as a Entity’s material as mramato suggested in the GitHub issues thread. If you have any insight please do tell.

I’m still not quite happy with the performance, but it works well enough for anyone interested to check it out on GitHub.

Have you added any profiling code to figure out where the bottleneck is?

For the update layer does the browser loading timeline show where the bottleneck is? The Cesium imagery providers are generally very fast at getting the provider bootstrapped and ready to request tiles.

It looks like a lot of time is spent on this: instance._heatmap.getDataURL() (line 2 of CesiumHeatmap._getImageryProvider), which is the heatmapInstance.getDataURL() call from the heatmap library.

When I do that I get the following error:

The bottom one points to the CanvasRenderingContext2D the rest points to the canvas on which the heatmap is drawn. This canvas is hidden by way of setting ‘display: none’, but removing that doesn’t seem to make a difference.

I’m not quite sure how to pass on a canvas in stead of a url to this function.

Is that error when using the Rectangle.material? Or a SingleTileImageryProvider? I expect it to work with the former, I’m not sure about the latter.

Hacktastic, but it should work.

Writing an imagery provider is pretty easy. If this works for you, you should do that.

I don’t want to discourage you from using a Rectangle.material as Matt has been suggesting, though. It might be a better choice.

That error is from using it with SingleTileImageryProvider.url.

It kind of works when I use Rectangle.material, but there are some issues:

I’ve actually been thinking about creating my own ImageryProvider. I’ll look into this if the Entity option doesn’t pan out.