Read more about Cesium for Unity in the blog.

We look forward to hearing your feedback on the plugin and how Cesium can enable you to build even more 3D geospatial applications using the various engines we support.

Thanks to the entire Cesium Community for the continued support!

Is there a “Requirements” section I’m missing somewhere showing resources needed to run Cesium for Unity? (EG: min RAM, HDD space, processor, etc…) This would be most helpful.

Cesium for Unity package error，（ Cannot connect to ‘github.com’ (error code: ECONNRESET).Verify your environment firewall policies allow connection to thishost name. If your system is behind a proxy, verify your proxyenvironment variables(HTTP_PROXY and HTTPS_PROXY) areproperly set.）

Is there a “Requirements” section I’m missing somewhere showing resources needed to run Cesium for Unity?

Cesium for Unity currently runs on 64-bit Windows, macOS, and Android (including Quest). It should generally run on any such system that can run Unity.

If you follow the quickstart instructions, the Cesium for Unity package will be installed from GitHub. Your system in general and Unity in particular need to be able to access it. If that doesn’t work on your system or network (due to a proxy or other network restrictions), you can download the .tgz package from github on a system that can access it, and then install the .tgz manually using the Unity Package Registry. The releases are found here: 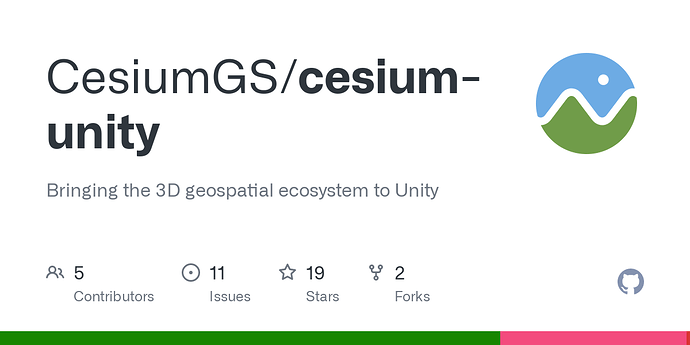 Bringing the 3D geospatial ecosystem to Unity. Contribute to CesiumGS/cesium-unity development by creating an account on GitHub.

Adding Datasets error：Only binary glTF version 2 is supported, found version 1 （When I try to load a 3D Tilesets from my server）.how can i do？

For your first error, your 3D Tileset is using glTF 1.0, which is not supported in either Unreal or Unity, and also removed from CesiumJS. We recommend that you upgrade your 3D Tileset to use glTF 2.0 and we’ve made an open source tool available for this GitHub - CesiumGS/3d-tiles-tools.

For the second error, Point Clouds are not yet supported in Cesium for Unity. We expect this to be added in Early 2023.

I have a problem when using your newly released cesium plugin on unity 2021.3.10f1, When using windows and android app build it works fine, but when using IOS and WebGL build on unity it gives error where your Plugin can’t find the “Reinterop” library, don’t know if you have a way to fix the above error.
I hope to hear from you soon 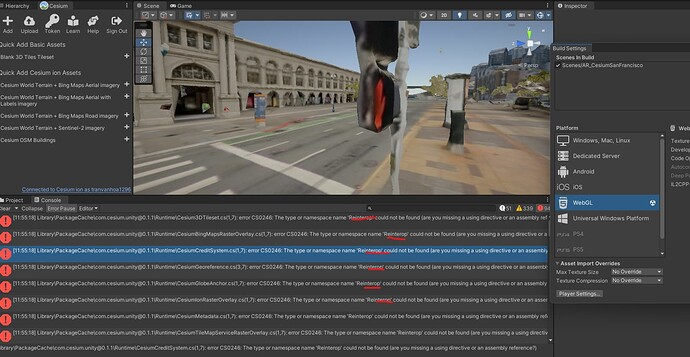 iOS and WebGL are not supported by the current Cesium for Unity release. We expect to add iOS support soon. WebGL is likely more challenging, and may not be (reasonably) possible at all given that Cesium for Unity uses native code. In case it helps, Cesium also offers a pure WebGL 3D geospatial product, called CesiumJS: CesiumJS – Cesium 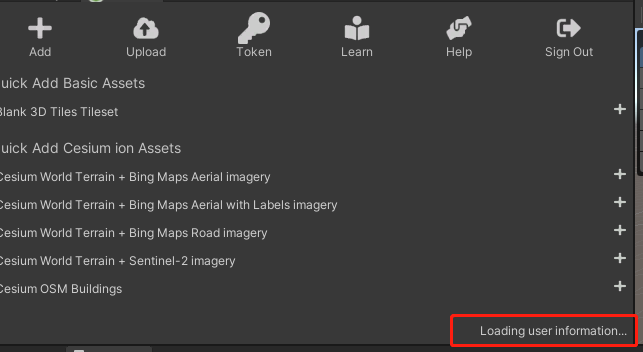 I thank you very much for your feedback. Actually I am using Cesium on Unity which works very well on 2 platforms Android and Windows. I will be waiting from you next upgrade to support IOS and WebGL features on Unity. Many thanks from your team.

Hello Team Cesium
Again, I have a problem with the tiles failing to load at some point (without any log), it still does after clicking the button(Refresh Tilleset) to reload.

I want to highlight objects and building whenever i hover on objects or select them… but i am unable to find any api solutions regarding this issue. Any information you can provide us regarding this would helpful. Also where can i get unity c# documentation for cesium. 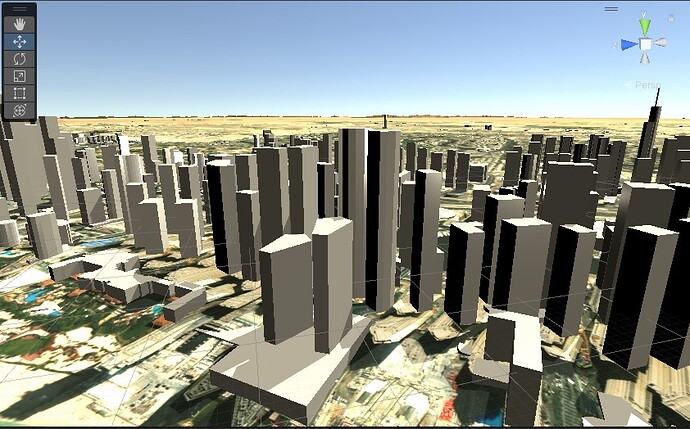 The “Header value contains invalid characters” is likely caused by Cesium for Unity trying to put certain information in the request headers when it communicates with Cesium ion, and in your case that information contains characters outside the ASCII character set. I’ve written a bug for this:

Probably when the project name uses non-ASCII characters, which Unity (and proba…bly HTTP in general) do not allow. As reported here: https://community.cesium.com/t/launching-cesium-for-unity/21380/12 We can likely fix this by encoding as described in [RFC 8187](https://www.rfc-editor.org/rfc/rfc8187).

Until it is fixed, you can likely work around it by renaming your project to use only ASCII characters. I understand that’s not a great long-term solution, but it should get you running for now.

We see the same message when trying to run Unity from Linux (both Ubuntu and Arch), without using IOS or WebGL. Could this be that Cesium for Unity is not supported on Linux either?

Thanks for your response,

But now I am facing new issue in cesium for unity, Tilesets are Perfectly loading in editor and also in build for windows, but when I am building android app, tilesets are not loading… And this is happening in one project I am already working on

Could this be that Cesium for Unity is not supported on Linux either?

Yes, only Windows (Intel x64), macOS (Intel x64 and Apple Silicon/ARM64), and Android (ARM64) are supported in the current version. It should be possible to build it for Linux on your own system (we have done this in the past), but we don’t currently provide the native code compiled for Linux.