Any way to do a cone without base?

I am trying to add a cone as the earth shadow caused by the sunlight. My problem is that, since the cylinder origin is inside the Earth and the shadow cylinder base goes through the Earth, you can see a strange visual is created. 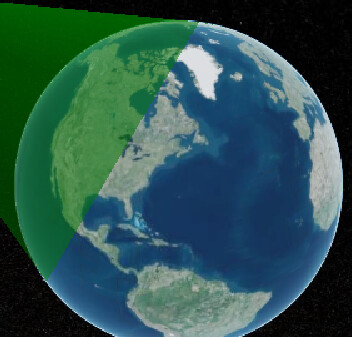 Is there a way to create a cone like that but without a filled base?
Here is the scenario

I have tried with a wall, but it is not useful here since it is perpendicular to the globe.
Thanks in advance.

Not an expert, but one thing I tried for this was just adding

That’ll hide the parts under the ellipsoid. You’ll run into issues along the edge where the mesh of the cylinder and the not-exact-circle of the ellipsoid don’t match. Might be able to hide some of that by adding some diameter to the earth_radius portion of the ellipsoid, but I don’t know if there’s a perfect answer here.

Thank you so much.
Honestly this looks good, it could be a solution.
Thanks again!