I just started to work with Cesium and I began a VR project but when I add any terrain to my project the tiles get blurry (images attached).
I noticed that when Im playing with the Lightings then it has some effects on the tiles blurry level but when I tried to remove all lights and deploy MobileSkySphere it still remain blurry.

I tried to do the same (adding the Terrain + deploy MobileSkySphere element) on an Empty Project and all went FIX!

I guess some properties in VR project makes it blurry but I couldn’t find which properties.

If any1 can help direct me how to handle this blurry ill be glad. 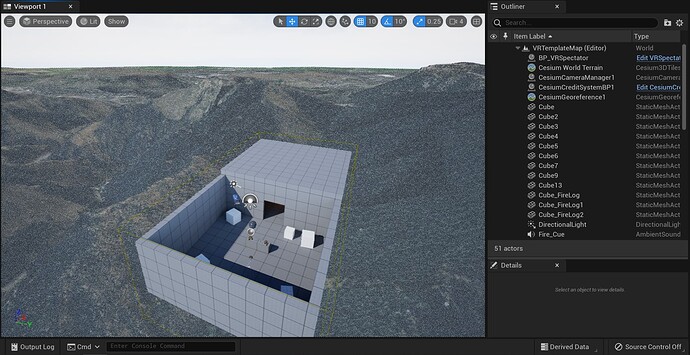 If I understand correctly, you’re saying that this issue only happens in a project using the VR template?

If so, the best way to narrow this down is likely trying to isolate the elements of the VR project to figure out if any one of them is the cause. I would start with anything relating to pawns, cameras, or post processing. Try replacing or deleting them and seeing what happens.

Hi,
Was anybody able to figure this out? I have the same problem. It looks like a dither pattern on the terrain and other tilesets that makes them translucent. The effect is the same in editor and in play mode.

Seems like changing the anti-aliasing method solves the issue