An extra arrowhead sometimes appears on a polyline using PolylineArrowMaterialProperty. It appears somewhere in the middle of the line and can shift around and appear/disappear on moving the camera. Sometimes it appears while the camera is moving and disappears when the move is ended, but often it persists. For example, here is a screenshot where the extra arrowhead appears at the same time as the expected arrowhead, using the polyline demo: 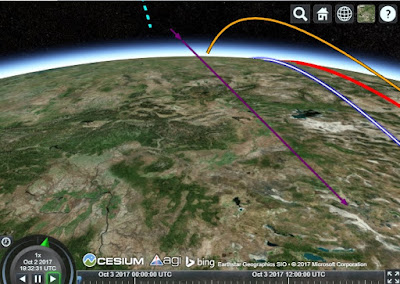 This can be reproduced with polyline demo here and manipulating the camera position. I’ve had best luck reproducing by rotating so that the arrowhead points towards the camera and then zooming in (similar to orientation in image above).

This looks like a visual bug in the line feature.

Thanks for a descriptive bug report Jacob! I was able to duplicate it.

I’ve gone ahead and opened an issue in the GitHub repo here. If you figure out any other info, please continue the discussion there.