So when we switched to 5 with lumen this started to happen: 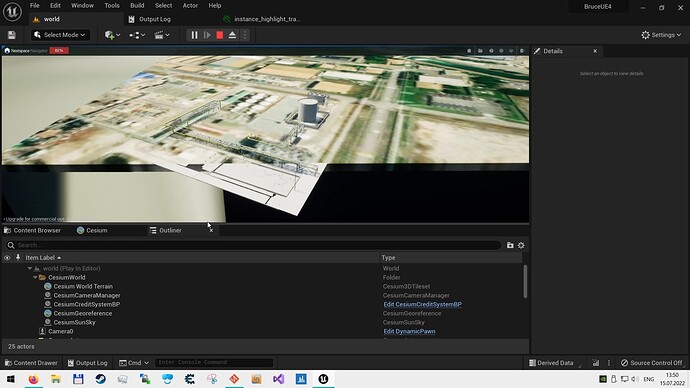 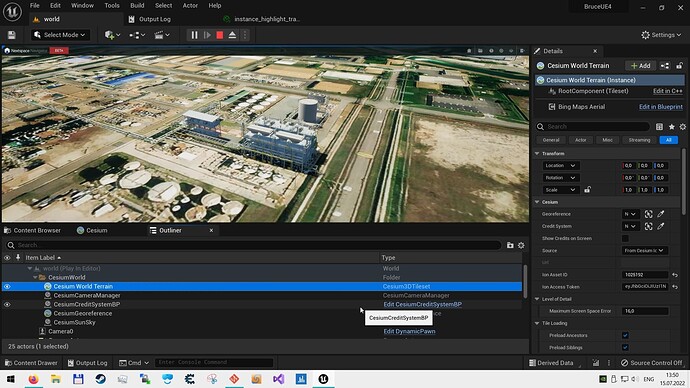 Whenever earth tileset isn’t selected in the outlier it flickers as pictured on screenshots. Doesn’t happen on every tileset, or when it’s just the earth model.

Moreover, i tried to figure this out, and determined that this only happen with manually compiled cesium(i am on 7e4d66bc382988da7c1b2f51ca42b3a87589c27b which seems to be the commit you guys build plugin for the market), BUT, this also happens if i use packaged plugin, without deleting all the cache in AppData/Local/UnrealEngine
One the marketplace plugin, with cleaned cache, doesn’t seem to occur.

Thanks for bringing this to our attention. Does the issue still occur with the manually-compiled plugin after you delete the cache?

You mentioned it doesn’t happen with every tileset. Can you share more information about the tilesets that are present when the issue occurs? Do they have anything in common? (E.G. created in the same way, containing certain types of data?)

Yes, it does, and only on compiled one, in that circumstance.

I’ll check up on what i can share models-wise and get back to this thread.

Do these symptoms suggest anything? I mean it seems like something in the plugin is just choking on detail and overflows, but where specifically would that occur? I have cache limit set at 20gb for the earth tileset.

Thanks for the additional info. An issue has been created here to track this problem: CWT flickering with manually-compiled plugin at certain commit · Issue #914 · CesiumGS/cesium-unreal · GitHub

Any additional information you can provide would be appreciated - you can add it directly to the issue on GitHub.

If I had to guess, it may be that something in the cache is getting corrupted, since deleting the cache helps, but I’m not sure why it would only be happening in the manually-compiled version.

Unfortunately, I’m not able to reproduce the issue on my end. If you are able to share a tileset or asset ID that induces the issue, that would be helpful for diagnosing the problem. Also, just to double-check, are you using any modifications to the source code, or other plugins in your project that could possibly be causing a conflict?

For a workaround while we try to find a solution, I recommend using only the prepackaged version of the plugin for your project.

If that is not possible, you could also try setting the cache limit of the world terrain back to the default value to see if that has an impact.

Do you build marketplace plugin in some special way, that differs from the build instructions on git?

As far as I know, there’s not a difference, but I will double check.

Does reducing the cache size of Cesium World Terrain back to default have an impact on the issue?
Also, does camera movement impact the flickering? If you are able to provide a video that might help us get a better idea of the problem.

No, but enabling “render custom depth pass” does indeed solve it. Somehow.

Hi! We are experiencing the same issue. Terrain tiles flicker very badly and as soon as we select the “World terrain” in editor, flickering stops. (self built 1.18.0 version)

Also, many thanks for the “render custom depth pass” idea => it solves this for us also.

Btw. too bad we cannot upload videos to the forum, this bug would be easy to visualize as a video.