I’m going to start this thread because my issue has been going on for a week, in case I’m not the only one having an issue

I am about to test v1.28, hoping my hardware bug has been fixed in this release. Hannah, please wait to respond until I test the v1.29 update.

I have been developing a WordPress plugin to support an online Google map of daily avalanche forecasts since October 2013, and was excited to discover the initial release(s) of Cesium in the Fall of 2014. For three years plus, I have been developing the Cesium map as a replacement for the Google map; the inability to clamp-to-ground geoJSON polygons in Cesium has forced me to use the 2D Google map for 3 Winters… NOW, I finally have the functionality in Cesium to use it for my avalanche forecast map, but my hardware is aging (and I’m an unpaid volunteer…).
My Cesium development and initial testing are on localhost using a Windows7 laptop with Intel HD graphics chipset, for which the newest available driver is 8/31/2011, which may limit this hardware’s support for the latest WebGL 1.0.3 standards published 10/27/2014, but I haven’t had any problems on this laptop yet…

As soon as I have a stable version on the laptop/localhost, I upload the code to a GoDaddy server, running WordPress on IIS, and test the online Cesium map using several additional devices & browsers. My wife usually gets an email from me, when my latest Cesium map is ready to test in Safari browser an her iPhone, iPad, and Mac laptop…

I test Cesium in Chrome on Android using my Samsung S5 phone, which was new when I started this project 3-4 years ago; its also the mobile device that the snow rangers use(d), who post the daily advisories. I’ve never had a problem running Cesium on the S5, including initial 1.27 clampToGround implementation, which was rendering polygons on terrain during some brief tests before I updated Cesium to 1.28

Since updating Cesium to 1.28, I’ve had inconsistent results reproducing this bug in Chrome on my Samsung S5 device; maybe its my hardware, maybe its my code, maybe its the Cesium core…? 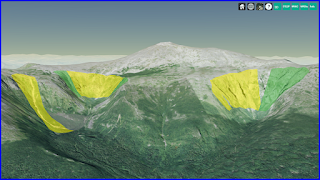 That looks like a really neat app! Glad Cesium is working out for you. Would you be interested in writing a showcase for our demos page? http://cesiumjs.org/demos.html

We like to feature the kind of cool things people are doing with Cesium. Let me know and I’ll put you in touch with our editor to talk about putting something together.

We did have a Samsung bug that was fixed recently, so yes, please let me know what you find out after updating to 1.29 =)

Hannah-
The good news first: After updating to v1.29, I haven’t reproduced the FragmentShaderFailedToCompile error, the map viewer seems to initialize and remain stable; the demo on cesiumjs.org home page runs wo the shader error.

The bad news: geoJSON polygons still render underneath STK terrain on this Samsung S5 android device. I have heard, but haven’t confirmed, that a similar issue occurs when my online Cesium map is viewed on my wife’s iPhone 6.

I’m not happy about the new year yet, as the whole point of my development effort is an online map that can be viewed on mobile devices, so I can get out of my cubicle and take my Cesium map with me!!! I’ve tested the same map simultaneously on a Windows desktop browser in Chrome, and the clampToGround geoJSON datasource polygons render correctly on top of STK terrain.

Glad to hear you are no longer seeing that error! If your geometry is still rendering under terrain on the Samsung phone, it’s possible the phone doesn’t have support for geometry on terrain. In order to achieve this feature, we use the EXT_frag_depth WebGL extension and unfortunately not all devices have support for this extension. You can see if your device has support by going to http://webglreport.com/ and seeing if EXT_frag_depth is listed.
You can check GroundPrimitive.isSupported(scene) when your app launches and disable terrain if that function returns false so you can still see the polygons.

Regarding the ‘Range Error: Invalid Array Length’ error, I have seen that before but I have yet to find a reliable way to reproduce the crash so it’s been difficult for us to figure out what the problem is. If you have a way to reproduce this please let me know!

FragmentShaderFailedToCompile error is continuing to plague my Cesium map initialization and stability on mobile phones, but I determined the cause is the initial flyTo Heading, Pitch, and Roll parameters, when I go from Cesium’s default view to custom coordinates. I’ve observed flyTo results in the camera swinging out into space before coming back to Earth, and in a few cases, I observed the GL crash while rendering this flyTo. Apparently my desktop hardware is more resilient handling the results than small-screen devices. This flyTo occurs when the geoJSON datasource is done loading, so the timing is coincidental.There are many things I have yet to try to resolve that, although the flyTo animation is cool, including suspend events

Thanks, those maybe very helpful references. I had read about the EXT_frag_depth WebGL extension last month, forgotten the details, and was going to look up whatever I had read about how cesium implemented the clampToGround

From a public safety standpoint, an avalanche hazard map that loads everything except the hazards is unacceptable. If I am going to promote a 3D Cesium alternative, maintaining the old 2D Google map maybe required for backward-compatibility with older browsers & hardware. I had just begun a little research into querying the browser/device WebGL support, and how to remotely diagnose/debug the mobile device Chrome browser without logging messages to the java console. I got as far as digging up an old function I wrote to debug another issue years ago, which may be helpful to others: